Beware of The Witching Hour

Carol came home from work at her part-time job at 6:30. She had had a bad day: unreasonable deadline, a heated argument with a co-worker, and then a dead car battery and a half hour wait for AAA. She was fried. All she could think about was getting in the house, kicking off her shoes, hugging the kids and then crashing in front of the tv and watching the news. Dave had taken the day off to stay home with the 5 year old who had to miss school because of a low fever. Carol wasn’t really thinking about it, but she expected that Dave would be pretty chill after a nice day at home and would be making dinner. 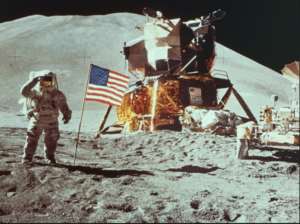 “Houston. Tranquility base, here. The Eagle has landed.”

As soon as Carol walked in the door, she found a mess of toys and clothes all over the downstairs floor, and smelled a burnt odor wafting through the house. Dave came out of the kitchen, said hello, and gave Carol a peck on the cheek. Without missing a beat he went into a story about how everything in his day had gone unbelievably wrong and he was stressed to the max. He had been attending a toilet bowl flood caused by piles of toilet paper stuffed in it, when he lost track of the dinner, which burnt to a crisp on the stove. He said that he had to call the plumber and that it cost way more than he thought possible and that they just couldn’t afford those kinds of unexpected expenses, especially since they needed a new oil burner. He was wondering if Carol could go to the market and get some groceries and then help him put together another meal, while he tried to scrape the burnt pot. He expressed his annoyance that Carol hadn’t bought the non-stick cookware that he had asked her to get months ago.

“Are you going to figure out a way to blame this on me?” she asked. “I can’t believe you can’t spend a single day at home without creating a freaking flood and a fire at the same time.  Maybe now you can appreciate that it’s not so easy. Look at the mess I had to walk into!

“Well, you sure didn’t think it might be good idea to tell me about Jared’s little game of stuffing toilet paper into the toilet. What a mess! And it cost a mint. And you left me with a drawer full of moldy vegetables, so that I had to use that frozen crap anyway.”

“He never does that kind of thing with me. You always let him get away with murder, because you want to be the good guy all the time. You just don’t get it. And you don’t give a damn about the kind of day I had. And I’m not going to any damn grocery store, and everybody can eat corn flakes for all I care. I’m going in to lie down, and don’t bother me unless the house is on fire. Again!” Door slam.

“Yes. And so am I. Go up to your room, and don’t ever let me see that toilet paper trick again.” Tears, more slamming doors.

And the evening limps on.

The witching hour. Homecoming Touchdown. “Tranquility Base here. The Eagle has landed.”

Humans under stress. Needy. Depleted. The Witching Hour. Somehow, as partners, as we are reconnecting after a stressful day, we imagine that the other person will, magically, make it all better. We believe that there is a support team back on the ground (in Houston?) looking out for our every need. “As soon as I (he, she) walk(s) through the door, it will be all better. My partner (good mommy, good daddy, NASA support team) will fix it. The day’s stresses will dissolve in a warm bubble bath of caring, nurturant, perfectly tailored indulgence.” “Here, sweetie, sit down and put your feet up so that I can massage them. I’ll take care of the kids, cook dinner, clean up, bring you your milk and cookies, call your sister and work out that ‘thing’, finish writing your report for tomorrow, and then watch your (movie; Netflix series; game; news-show; reality series) with you. Then I’ll have (not-have) sex with you, as you wish. Do you know why? Because I love you, and I know exactly what’s in your head and I’m going to give it to you, because you’ve had a rough day.” Or, maybe not.

What if everybody had a rough day? What if Houston was hit with an earthquake and there is no one there to support your mission? Probably the thing to do is to become an angry baby and start berating and punishing the other guy. If you need them, here are a few infantile, manipulative, options: name calling (stupid, lazy… great old standards), getting into the other guy’s head (‘you don’t care about me’, ‘you’re just angry because I wouldn’t let you get those Rihanna tickets’…),  withdrawing (‘I’m going to watch the news’, ‘I’m out of here’), withholding love (silent treatment, withholding conversation, affection and sex), tantrum-throwing, threatening, whining, yelling… The infinite variations on those options should be enough to keep you bitter and resentful for a few decades or until the relationship explodes.

Or we can try something else. In all my thinking about relationships, and marriage in particular, I keep returning to the idea that we will never change the other guy, so, what’s left is the challenge of changing ourselves. Difficult enough. I also perseverate on the idea that when we are in “baby mode”, that is, when we have lost hold of the kind, loving, compassionate, generous, fair, empathic “adult” who we are at our best, then all relationships go to compost. We stop caring about each other when we are in “baby mode”. Our beloved partner is no longer in the frame. We can no longer make “transcendent” decisions. We can no longer push ourselves to higher expressions of love, sacrifice, and maintenance of our commitments. Babies don’t do any of that stuff well. Babies are all about “me, me, me,” and “now, now, now,”  and, although, we all spend a good deal of time in that place, we should understand that when we are there we are not contributing to the kind of “artful” relationship that we are striving for. Another problem is that when we are in it, it’s hard to get out, because, duh, we are babies. Babies are notoriously poor at self-reflection and self-correction.

The trick is to work on ourselves constantly,  and plan ahead for when we are likely to be in “baby mode”.  As “adults” we know that at some time in the near or distant future we are going to get tired; we know we are going to be stressed; we know that we are going to be hungry or horny or irritated; we know that we are going to confront very challenging demands of work, home, parenting, and relationships. When we are in our best “adult” place, we stand half a chance of preparing ourselves, rehearsing options, planning for contingencies, making plans, and deals with our partners for when stuff hits the fan. This is where it is incumbent upon us to get disciplined, creative and even artistic. If we don’t, we’ll crawl through our relationships pouting and whining.

So, what are some ideas for Carol and Dave?

Carol could stop on the way home and down 3 Bloody Mary’s before walking in the door.; (just KIDDING!!)

Carol could alter her homecoming fantasy and plan for the contingency that the other members of the household might be in some less-than-transcendent state and prepare herself;

Dave could practice some of his meditation strategies and get to the point of seeing the Louie CK humor in his domestic sit-com day, breathe deeply, and prepare his loving “adult” for his wife’s homecoming;

Dave and Carol could have a conversation during a pleasant walk (obviously prior to the next double melt-down) and devise a plan and a deal for the next time they are both feeling stressed at the same time (an inevitability): someone can be designated disaster coordinator and the other takes direction and does as they are told, with roles reversed on successive occurrences (once again, inevitable).

Finally, whatever strategies we might pre-plan, things can go awry. When we have shared meltdowns, we need to practice recovering as quickly as possible. Let’s remember that we love each other, that we are all capable of falling into that baby place (triggered by the world, or each other.) Don’t necessarily search for “deeper” explanations unless the cycles are frequent, abusive, repetitive or revealing of deep-seated, unresolved resentments, in which case seek counseling. Otherwise, as grandma might have said, “Get over it,” as quickly as possible, and get on with the job of loving each other.

This entry was posted in Marriage, Uncategorized and tagged marriage, relationships. Bookmark the permalink.