Posted on February 1, 2015 by Larry Stallman

Of course I don’t do it; and I know YOU don’t do it; but SOME people, actually employ manipulative strategies in an effort to get what they want in their relationships. Can you imagine? 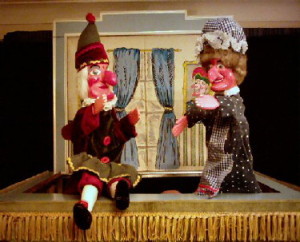 Punch: Oh deary me, deary deary me! Judy! Judy! Come up stairs. [He looks around the edge of the stage.] Where’s my wife Judy?

Judy: Mr Punch. What is it? What do you want? [Knocks Punch down] Why aren’t you helping with the housework?

What is manipulation? I think of it as a way for one person to get what he/she wants by using any means necessary and disregarding the legitimate autonomy and rightful wants, needs, and preferences of the other person.

Here’s a brief list of the manipulative strategies used by (would-be) lovers, spouses, partners-in-life: bullying and abuse (physical, sexual, verbal, financial), threatening (if you don’t stop it, I’ll….); posturing (puffing up large, shrinking down small, eye rolling), yelling louder than the other guy  (I SAID THROW IT OUT), name-calling (you’re a moron), withdrawing (where are you going?), coldness, withdrawal of love (don’t touch me, please), silent treatment (c’mon, honey, I’m sorry, just talk to me), guilt tripping (no, you go ahead and do what you want, I’ll be fine), employing the support of others (my cousin says you are SO wrong), passive aggression (I have no idea how your keys fell behind the radiator), pouting (long face, stomping, rattling), punishing (no sex, no affection, no sharing, no ride to ceramics class).

These are some of the major categories; there are infinite variations. Our impulse to manipulate took form in childhood, when we were truly powerless. If we wanted something, we had to figure out how to get it from the powers that that ruled our world, and we were quietly impressed by the manipulative modeling of others; we were cute, or smart, or “good”, or talented, or we pouted, or whined, or name-called, or bullied, or had tantrums, or lied. Fairness and mutual respect didn’t enter the equation. In adult “loving” relationships manipulation can still be very effective in achieving short-term victories. There is an enormous relationship cost, however, to winning by manipulation. With every manipulative victory, the manipulated partner is left with a residue of resentment, which can easily accumulate and pollute future encounters. Resentment corrodes a relationship and creates patterns of manipulation and counter-manipulation, emotional distance and ultimately, dissolution of the emotional bond (whether there is an actual breakup or not).

The alternative is not always easy, and requires awareness, a strong intention and daily practice: become aware of our manipulative strategies; replace them with a process based on love and respect, understand that “we both count all the time”, pursue conflict resolution outcomes that work for both partners, and, when all else fails, acknowledge and apologize for manipulative behaviors employed through old habit.

Let’s strive for love with no strings attached.

To purchase The Marital Arts by Larry Stallman at Amazon.com click here.